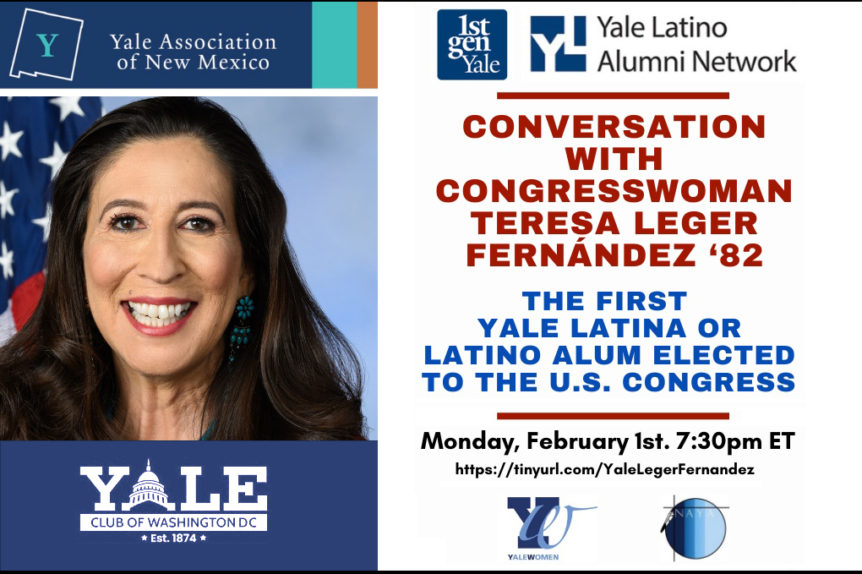 WATCH THE VIDEO OF THIS EVENT HERE

Hear about her experiences before Yale, at Yale, and beyond, and ask her questions about her journey and priorities for the future. This event is co-sponsored by the Yale Club of Washington, D.C., Yale Association of New Mexico, 1stGenYale, Yale Latino Alumni Network, Native American Yale Alumni, and YaleWomen.

About the Speaker:
Teresa Leger Fernández was born in New Mexico. Her mother was a bilingual educator and her father, Ray Leger, served as a member of the New Mexico Senate. After graduating from West Las Vegas High School, Leger Fernández earned a B.A. from Yale and a J.D. from Stanford Law School.

From Stanford Law School, Leger Fernández returned to New Mexico to work as an attorney, specializing in community-building and tribal advocacy. Leger Fernández was a White House Fellow during the Clinton Administration and later served on the Advisory Council on Historic Preservation during the Obama Administration. She also worked as a liaison between the White House Office and the US Department of Housing and Urban Development. For 30 years, Leger Fernández has operated Leger Law and Strategy, LLC in Santa Fe, New Mexico. The firm focuses on community development, tribal advocacy, civil rights, and social justice.

In 2020, Leger Fernández won the election for New Mexico’s District 3 in the House of Representatives. She is now the first Yale Latina alum in the U.S. Congress, recently elected to be the Freshman representative for the Congressional Hispanic Caucus.