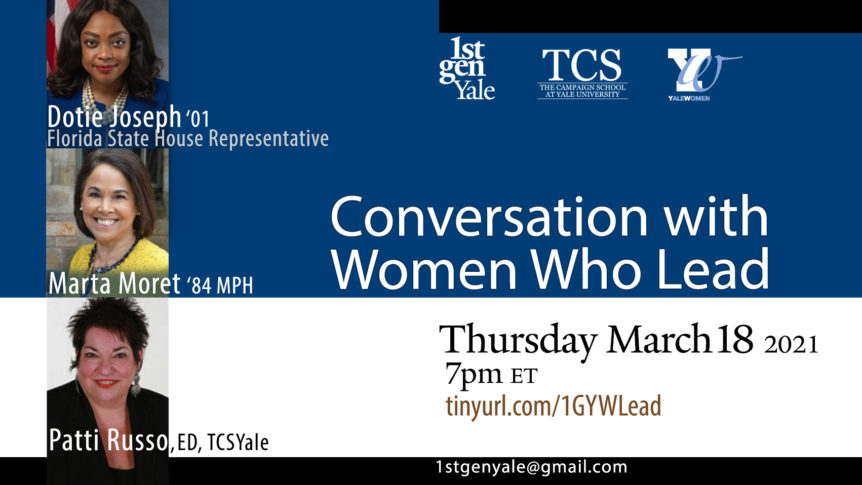 Meet three incredible women who will share how they became civically engaged, working on issues that they feel passionately about in their respective communities. Hear about how their time at Yale helped to define who they are today. Learn how to have impact developing your own strategies, working on a campaign, running for office, and more from The Campaign School at Yale. Co-sponsored by YaleWomen.

About the Speakers:
Marta Moret ’84 MPH is president of Urban Policy Strategies, a New Haven-based consulting firm that conducts research and assessment in public health. This work has served as a model for community-academic partnerships in addressing public health issues facing underserved families and children. Previously, Marta was the deputy commissioner for the Connecticut Department of Social Services. Marta is a member of Hispanics in Philanthropy and the Eastern Evaluation Association. She currently serves as President of The Campaign School at Yale.

State Rep. Dotie Joseph (FL-108) ’01 and ’14 TCSY was born in Haiti, and grew up in the North Miami, attended Miami-Dade public schools throughout her district, and earned degrees from Yale University and Georgetown University Law Center. Dotie has been a champion for community empowerment, and advocate for civil rights and human rights since she was a teenager – and wants to take her passion for service to Tallahassee.

Patricia Russo is a nationally recognized leader focused on improving the quality of life for women in Connecticut and the US. For over twenty-five years, she has held leadership positions in various organizations centered on women’s leadership and on federal, state and local political campaigns. Currently, Patricia serves as executive director of The Campaign School at Yale, a nonpartisan, issue-neutral political campaign training program for women interested in running for public office and campaign management.